Categories
Home » BOOKS » Prophecy » When a Jew Rules the World: What the Bible Really Says About Israel in the Plan of God

When a Jew Rules the World: What the Bible Really Says About Israel in the Plan of God 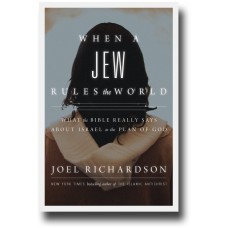 There’s only one conclusion you can draw by taking the prophecies of the Bible literally, says New York Times bestselling author Joel Richardson. Someday soon, a Jew named Yeshua – or Jesus, as He’s known in the West – will rule the world from Jerusalem.

In his new book, When a Jew Rules the World, Richardson paints a picture of what that one-thousand-year reign will be like, along the way blow-torching the notion that Gentile Christians have "replaced" the Jews and Israel as the people of promise. Richardson lays out the tragic history of anti-Semitism within the church from the very beginning in what may be the most thorough repudiation of what has become known as “Replacement Theology,” or, as Richardson calls it, “Supersesessionism.”