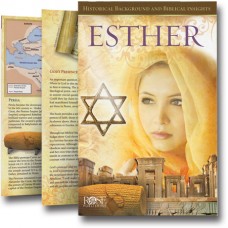 It's easy to characterize Queen Esther as the lucky orphan girl who won the heart of the king. But in reality, she was a young woman with a tragic background and dangerous secret that could cost her life and the lives of her family. She was married to King Ahasuerus (King Xerxes) who destroyed peoples' lives on a whim and had a history of killing people close to him. Worse still, the king's favorite counselor and chief advisor, Haman, was a mortal enemy of Esther and Mordecai's family.

Esther had to keep a low profile, keeping her secret, and hoping her enemy wouldn't make the connection. For Esther, life was unfair. But her story brings a message of hope to all who face trouble by showing how God works even through the fears and dangers. There can be happy endings in perilous times! This basic overview of Esther and the biblical and cultural insights is fantastic for a Queen Esther Bible study, Sunday school class, or small group discussion.