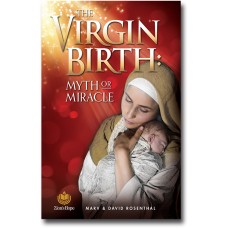 Marv and David Rosenthal collaborated on this booklet.

God created the first man from the dust of the earth and then breathed into him the breathe of life. God cause a sleep to fall upon the man whom He created, and while he slept, from his rib fashioned Eve. Thousands of years later, when Abraham was 100 years old, his godly wife, Sarah, miraculously conceived when she was 90 – and nine months later Isaac was born.

From the dust of the earth, from a rib, and from a woman of 90 whose womb had been closed, God created life. If God is God, if He is all wise, if He created the universe by speaking it into existence, then these things should not spurprise us. Rather, they are the kinds of things men should expect from an omnipotent God.

And this raises a question:
If God can bring life into existence from the dust of the earth, from a rib, from a dead womb, then what is the difficulty for God in having a young, godly, Jewish virgin conceive, and nine months later give birth to a son?