Answers to the DaVinci Code 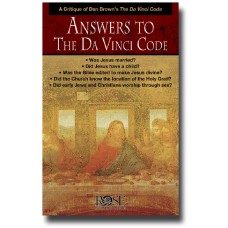 Dan Brown's best-selling novel, The Da Vinci Code, makes a number of false statements about Jesus Christ and the history of Christianity. Yet the story is so compelling that many readers believe it is true. This pamphlet answers the most important questions people have about this novel.

More than 10 million people worldwide have bought The Da Vinci Code, which makes a lot of troubling statements about Christianity, such as:

Answers to the Da Vinci Code is clear and easy to understand, even for those who have never read the Da Vinci Code novel. This pamphlet gives clear information to help people see the truth for themselves, using time lines and historical facts. For example, a character in Dan Brown's The Da Vinci Code, claims the figure seated next to Jesus in Da Vinci's "The Last Supper" painting is Mary Magdalene and not the apostle John, because the person has long flowing hair and delicate features. The truth is, Da Vinci painted young men this way.