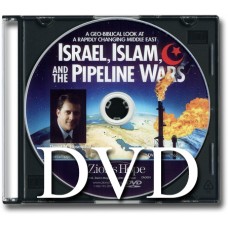 In this DVD, David Rosenthal, Zion's Hope Director of Operations, takes a geo-biblical look at the Middle East. He discusses the importance of Old Testament prophetic Scriptures – where there is so much rich information about the last days – what is happening in the Middle East, and what will soon come upon the earth. Studying Old Testament prophetic Scriptures gives us a sense of confidence and passion knowing we are drawing near the end of the age, with events occurring precisely as God’s Word says.

To understand the dynamics, it is imperative to know the region’s dominant religion, Islam. This is especially crucial in discerning how these events affect Israel.

There are two major divisions within Islam: Sunni Islam and Shia Islam. Though both are Islamic, the Sunnis and Shias are completely at odds with each another. What makes hostilities between these factions so much more bitter is that both sects control large portions of the world’s energy, both rich in oil and natural gas supplies.

Saudi Arabia and Iran, though major energy powers, are not the only ones. Consider Russia, which has a huge supply of oil and natural gas. And yet another, the small nation of Qatar, the real nation controlling much of the world's natural gas.

To complicate things, Qatar shares a natural gas field in the center of the Persian Gulf with Iran. Politically, however, Qatar is aligned with Saudi Arabia and not Iran. Saudi Arabia is the “big brother” of Qatar, and both are predominantly Sunni, while Iran is Shi'ite.

Why is this important? Back in 2009, Qatar and Saudi Arabia met with the president of Syria to say, “We want to run a natural-gas pipeline from the Persian Gulf through Jordan, Syria, up into Turkey, and eventually into Europe to supply Europe’s natural gas and energy needs.”

However, this posed a huge problem since Europe gets about 60 to 70 percent of its energy from Russia, which pretty much has a monopoly over Europe’s energy supply. If the Russian oil and natural gas monopoly in Europe goes away, Russia will implode economically.

Many of the nations involved in the boiling energy cauldron of the Middle East’s are specifically referred to in Old Testament end-times passages. David Rosenthal walks you through the key passages as well as adds additional light on the momentous involvement of Turkey as it pursues regional hegemony and its attempt to revive the Ottoman-Turk Empire.