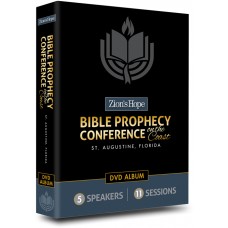 World events are swirling at a dizzying rate, propelling us ever close to the end of this age and the return of the Lord Jesus Christ to Earth!
For more than three decades, Zion’s Hope has been taking the pulse of world politics, gauging the nearness of end-times.
The Bible clearly teaches world history is winding down to a final, climactic 7-year period known as “The 70th Week of the Book of Daniel.” During this time the Antichrist will arise; the Seal, Trumpet, and Bowl Judgments will be executed; the Church will be raptured; Christ will return; and He will establish His 1,000-year Kingdom seated in Jerusalem.
What will the 7-year period look like? When will it begin? How will it affect believers at that time? And what of the 1,000-year – or Millennial – Kingdom? What can believers who have the joy of living in it expect?
Join our team of gifted Bible teachers as they take you on an end-times’ journey. These 11 sessions from the St. Augustine Bible Prophecy Conference will open your eyes to what will soon come upon planet Earth!